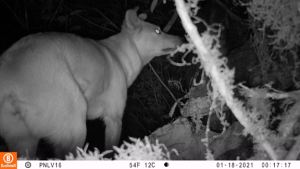 ​It is a cold and windy night along the La Visite Escarpment in south-central Haiti. The clouds form and then dissipate as they stream along the rocky faces of the nearby mountains. The wind gusts come and go and when it calms down a bit, you can hear the frogs calling and the mournful wail of the endangered Black-capped Petrel seabirds as they travel to their nesting colony on this high and remote rocky mountain range.

Black-capped Petrels return from the sea to nesting areas during the night to avoid predators. Historically, their natural predators were birds of prey such as hawks, falcons, and owls. However, as human communities have developed Caribbean islands over the past few hundred years, they have brought mammals such as cats, rats, and mongooses with them. Sadly, ground nesting seabird species such as the Black-capped Petrel have not evolved to avoid these introduced mammals and often fall prey to them. The introduction of mammals to islands has resulted in an unfolding global tragedy. Animals such as cats, rats, and mongooses have been directly linked to the extinction of 11 seabird species worldwide.

As part of EPIC’s program to protect and conserve the endangered Black-capped Petrel, our team has spent the last three years doing remote monitoring of petrel nests with cameras in La Visite National Park, Haiti. These cameras are carefully positioned and remote-activated to take videos and still images around the entrances to petrel nest cavities. This allows our conservation team to monitor petrels as they come and go to the nest and to detect interactions between petrels and introduced predators. As part of this effort, EPIC has detected the widespread presence of rats, cats, and mongooses throughout the colony. In 2019 alone, we observed all three of these mammal species at each of the 42 Black-capped Petrel nests we monitored. This was an astounding observation, and the data suggested the importance of addressing this threat to an endangered seabird.
​
During the 2021 nesting season, EPIC’s Black-capped Petrel conservation team in Haiti began to trap rats, cats, and mongooses at our study site in La Visite National Park. Our goal was to reduce the number of Black-capped Petrel deaths at this site and create an overall safer nesting area. This initiative is part of a larger effort to conserve and protect the Black-capped Petrel, including community-based sustainable agriculture, education, awareness of the Black-capped Petrel, and protection of critical petrel nesting habitat.