Naming the Many Seabirds of the Grenadines

A seabird identification workshop in the Grenadines archipelago is helping to increase the capacity of law enforcement to protect important seabird populations on remote offshore islands. During the two-day training, participants learned to identify species in the field and familiarized themselves with local conservation threats they may encounter in their work, such as poaching.

Seabird conservation is a growing concern within the Caribbean. It is especially so for the Grenadines (of St. Vincent and Grenada) which hold some of the region’s most important breeding colonies. Conservation of these species, their breeding, and feeding habitat is critical for ensuring their future.

Just over nine months ago, Environmental Protection in the Caribbean (EPIC) hosted a one-week Drone Training Course for representatives from various law enforcement agencies throughout St. Vincent and the Grenadines. The six trainees represented the Fisheries Division, Forestry Department, St. Vincent and the Grenadines Coast Guard Services, and Tobago Cays Marine Park. The course, facilitated by Serge Wich and Katie Doull of Conservation Drones, was aimed at increasing the capacities of law enforcement, and environmental departments and organizations, to monitor and enforce wildlife and habitat protection legislation on remote islands in the Grenadines.

During that training course, participants recognized that, in order to effectively monitor and protect seabirds and other wildlife on uninhabited and remote Grenadines islands, they required a working knowledge of local seabirds.

As a result, EPIC hosted a two-day workshop about seabirds for the six graduates from its 2021 Drone Training Course. The workshop was held on the 24th and 25th of May 2022 and was facilitated by Vincentian Conservation Biologist, Lystra Culzac. The two-day workshop was filled with much excitement because participants had been looking forward to the workshop for some time. This was the beginning of their journey towards increased knowledge of, and ability to, identify the seabirds of St. Vincent and the Grenadines.

While most participants had seen the more common seabirds such as the Laughing Gull and Brown Booby, they were amazed at the variety found locally, and the subtle differences that are used to tell several apart. The Sooty and Bridled Terns, in particular, caught their attention since the major difference between these two species was whether the white patch over the eye stopped near the top of the eye (Sooty Tern) or extended past the back of the eye (Bridled Tern). Later that morning, participants were also introduced to the Wildlife Patrol Form that was developed by EPIC to collect field data on breeding seabirds. This form is also used by the volunteer Grenadines Seabird Guardians to gather field data about local seabird colonies.

With binoculars in hand, the afternoon was spent on the beach at Lowman’s Bay and near the Kingstown Harbour observing seabirds such as Laughing Gull, Brown Booby, Royal Tern, and Magnificent Frigatebird. 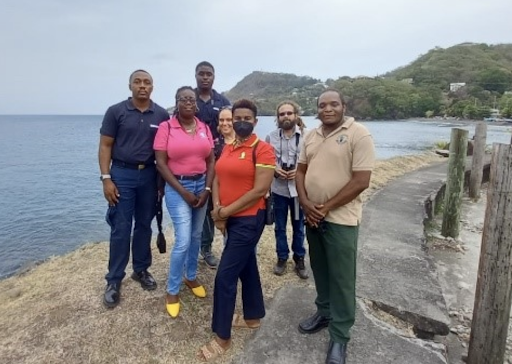 The next day, our team headed out to sea in the Grenadines to continue our observations. Participants were more confident at identifying and naming the common seabirds, particularly the ones they had seen during the previous afternoon. Some had even done overnight research to be more prepared for their trip at sea.  This was particularly important in recognizing the large variety of seabirds that have been recorded in the Grenadines. From Bequia, our team sailed to the open ocean and observed birds in flight and near the coasts of several uninhabited islands.  Hundreds of boobies surrounded us, apparently in hopes of snatching fish from our vessel, which was a regular fishing boat chartered for the day.

One Coast Guard Officer, being surprised at the number of different seabirds, commented “I often saw all these seabirds while at sea and thought they were all the same. I never realized that there were so many different species.”

Species seen on the second day included the Bridled Tern, Brown Noddy, Red-footed Booby, Laughing Gull, Brown Booby, Magnificent Frigatebird, Royal Tern, and Red-billed Tropicbird. The American Oystercatcher was also seen. A total of eight species were observed over the two-day period. Participants left with a greater appreciation of the unique adaptations and diversity of our local seabirds, opening up a new way to see these remarkable masters of sea and sky, and a better understanding of the conservation threats they may encounter. 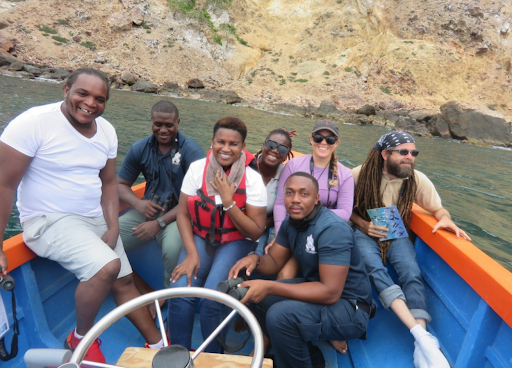