In May 2022, a small team of Haitian petrel biologists pulled out of the small dusty town of Jacmel, and headed their pick-up truck northeast. They eased it up the heavily rutted road to begin their expedition to see if endangered Black-capped Petrels nested on the mountain called Pic La Selle. Due to the remote nature of that area, few biologists had visited it for more than 60 years, when some of the first known Black-capped Petrels in Haiti were found there by David Wingate during expeditions in 1961 and 1963.

Pic La Selle, standing at 8,793 feet (2,680 meters) is the tallest mountain in Haiti. Often enshrouded by clouds, the partially forested flanks of this massif are part of the Parc National Naturel Forêt des Pins. The peak itself is extremely hard to access and requires a 4-wheel drive vehicle for the initial roads, followed by a dirt bike that can get you within view of the mountain, then a long walk over the last few miles to reach the peak. This expedition takes many days, requires equipment, stamina, dedication, and lots of time.

Black-capped Petrels have historically been known to be active on the flanks of Pic La Selle. In fact, some of the first known Black-capped Petrels in Haiti, were found on Pic La Selle during two expeditions to the area in 1961 and 1963 by David Wingate. During Wingate’s surveys, the team never located nests of Black-capped Petrels but rather detected calling petrels in flight. The large amount of flying and calling activity provided strong evidence that petrels nested nearby. Fifty years later, in 2011, a team from Societe Audubon Haiti, over the course of a more general biological survey of the area, detected 20-25 flying Black-capped Petrels during one night, near Pic La Selle. Due to the remote nature of the mountain, no team had revisited the area until now. 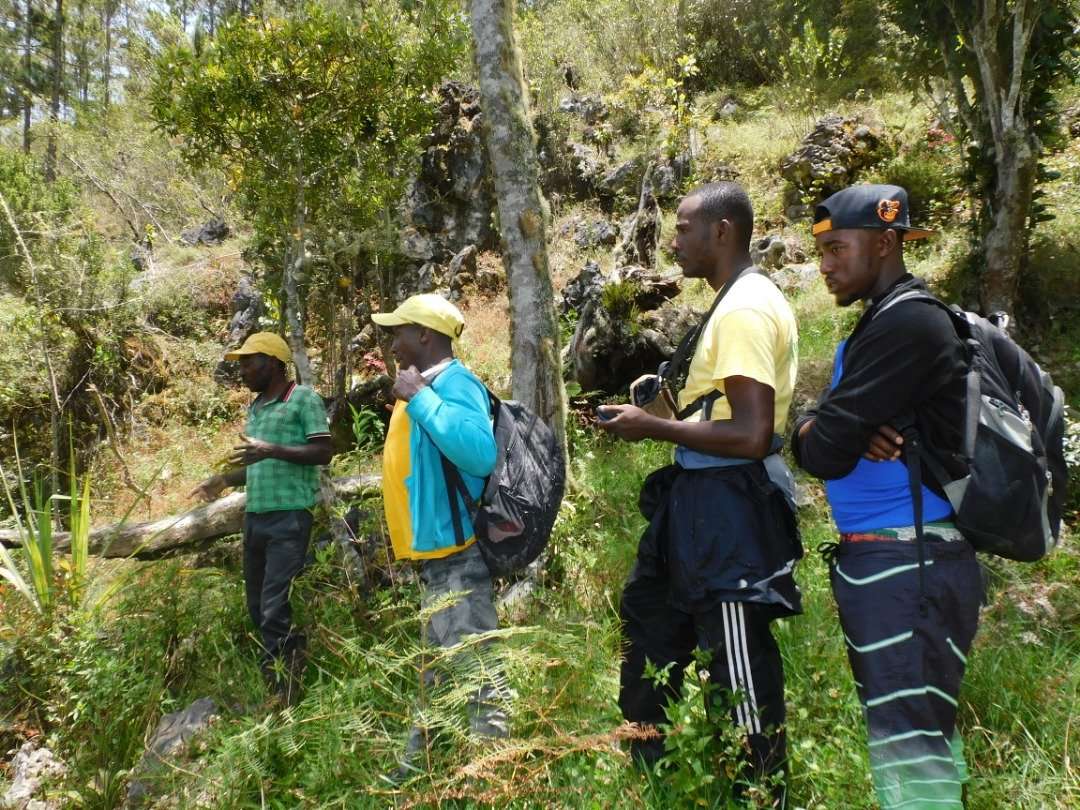 In Haiti, the conservation of the Black-capped Petrel takes place in two areas; The first is in the pine forests above Boukan Chat on the eastern border and the second is in the broad-leaved forests in La Visite National Park in the center of Haiti. These two locations were the only two known nesting areas for petrels in Haiti, although an additional small nesting colony is assumed in the Massif de la Hotte in far western Haiti.

Over the week-long expedition, the team visited four key locations: Bwa Dime, Ravin Ge, summit of Pic La Selle, and Ka Jon. At all four areas, the team talked to residents about petrels, playing the bird call for them and also showing them pictures of the bird. Through this community engagement, the team collected background information about the general activity of petrels in the area while also making broad assessments about land use and potential petrel conservation issues in the area. When playing the call for residents of Bwa Dime and Ravin Ge, many people confirmed that they heard the petrel calling regularly, although they did not know the potential location of any nests.

Additionally, the teams spent days hiking around and looking for petrel nests and evenings listening for the sound of calling petrels. With the weather being wet, windy, and cold, the ability to hike at night to these remote listening sites was further complicated by the lack of cleared trails and the far distances necessary to travel in the dark. The going was slow for the expedition team and patience and resilience were required by all. 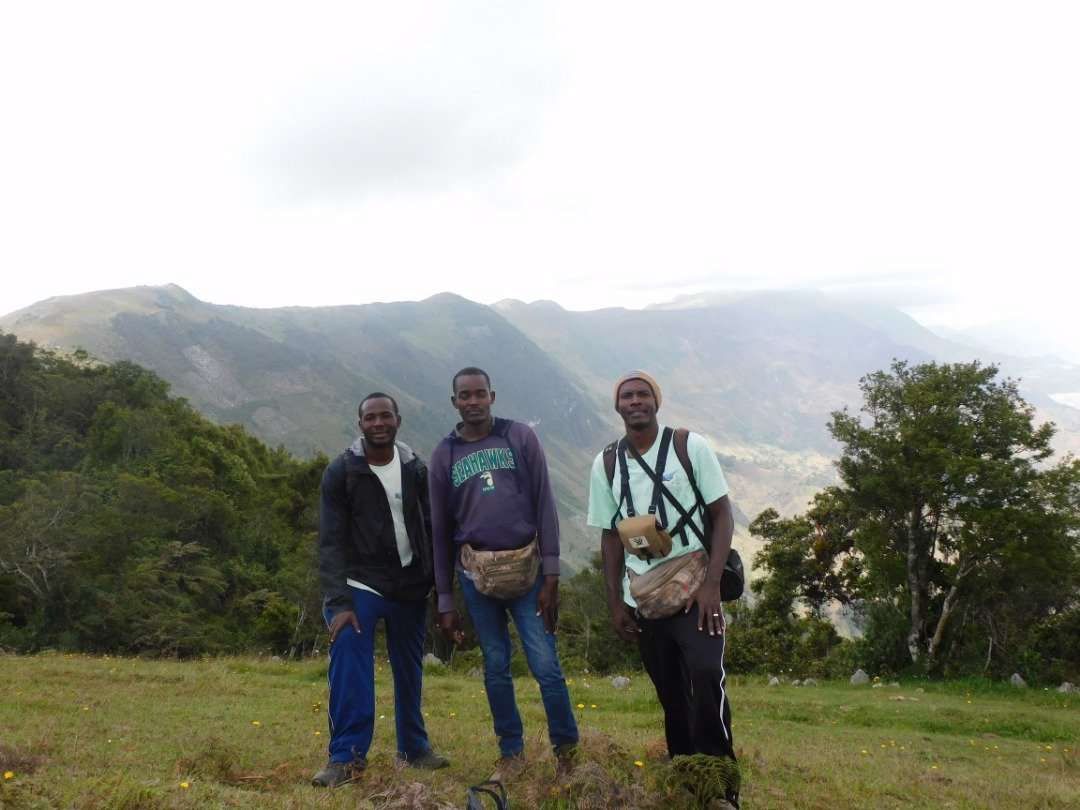 On the steep forested slopes of Ka Jon on May 24th, three of the expeditioners, Anderson, Maxon, and Renee, worked their way slowly down a steep slope. This work required lowering themselves carefully, step by step, holding onto the trunks of trees, and being careful not to lose footing. As they descended, the team methodically looked in every crevice they spotted as they moved downhill. Halfway down the slope, they shined their flashlight into a hole and a gray puffball with two black eyes blinked back at them. They had found a single Black-capped Petrel chick. This is the first confirmed nest of a Black-capped Petrel on Pic La Selle. What an accomplishment.

Later in the day, the team found one more nest but then had to end the search as night began to fall. Clearly, another visit would be required, and more nests would need to be found. In addition, talking to more locals about petrels would be helpful. The may lead to finding ways to engage the local community in the conservation of petrels in the area. 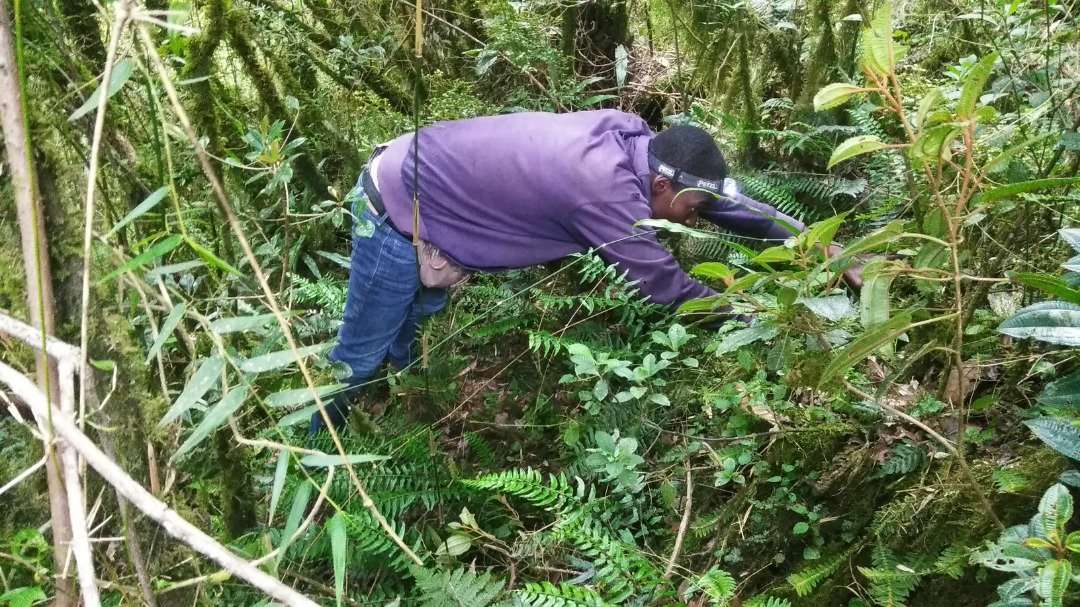 What’s Next and How Can I Help? EPIC’s plan will be to find funding for another expedition to this site and return in 2023. Hopefully, more Black-capped Petrel nests will be found with hopes to implement long-term conservation of the species on Pic La Selle. This site will be EPIC’s third Black-capped Petrel conservation site in Haiti, and we are excited to work towards the long-term conservation of petrels in Haiti. We will implement conservation models that have found great success at Boukan Chat and La Visite National Park, which include sustainable agriculture programs, youth environmental education, predator removal, and pride campaigns. You can learn more about these programs and how to support them by visiting EPIC’s Black-capped Petrel Conservation Program page at https://epicislands.org/where-we-work/flagship-programs/black-capped-petrel-conservation-program/

The Pic La Selle expedition team consisted of Anderson Jean, Maxon Fildor, and René Jeune and they were supported by three local guides, Jonas Julien, Cardy Paul, and Arnold Paul. The expedition was also supported and attended by Parc National Naturel Forêt des Pins Director, Elie Desmarates. Funding for this expedition came in part from the U.S. Fish and Wildlife Service through a partnership with the American Bird Conservancy. 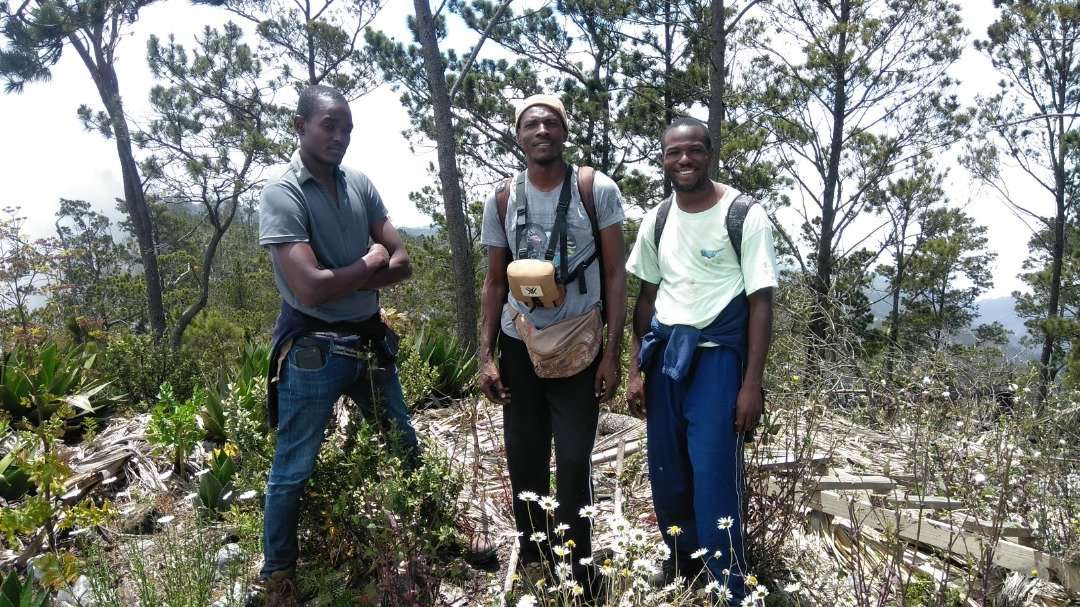